The layer window is on the right of the screen and usually collapsed on the bottom.

The layer window isn't shown on portrait mode. Make sure the phone rotation isn't locked and turn your phone into landscape to see it.

Touch it to expand and you'll have the layer window shown: 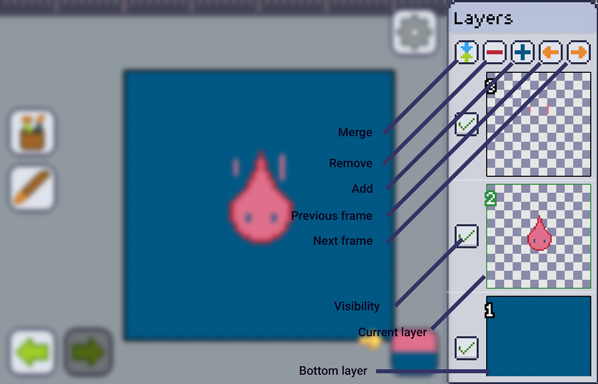 It consists of 5 buttons and a list of layers, all described below.

Layers are able to move freely. When one layer move, the other layers in other frames aren't touched, they remain the same.

All the layers of the current frame will be shown here, the green one is the selected layer. You can drag up or down to scroll through the list. Touching a layer and holding your finger down for a second will allow you to move this layer somewhere else. Swiping a layer left or right will delete it.

If you delete or move something you didn't intend to. The undo button works fine for deletions and moves.

Merge the current layer with the one right below it.

Add a blank layer or duplicate the current layer.

Toggles the visibility of that layer. A hidden layer is also hidden when exporting.